The following example illustrates the evolution of the Rule 30 CA, described in A New Kind of Science, as implemented with CellPyLib:

The initial conditions are instantiated using the function init_simple(), which, in this example, creates a 200-dimensional vector consisting of zeroes, except for the component in the center of the vector, which is initialized with a value of 1. Next, the system is subjected to evolution by calling the evolve() function. The system evolves under the rule specified through the apply_rule parameter. Any function that accepts the three arguments n, c and t can be supplied as a rule, but in this case the built-in function nks_rule() is invoked to provide Rule 30. The CA is evolved for 100 timesteps, or 100 applications of the rule to the initial and subsequent conditions.

Finally, to visualize the results, the plot() function can be utilized: 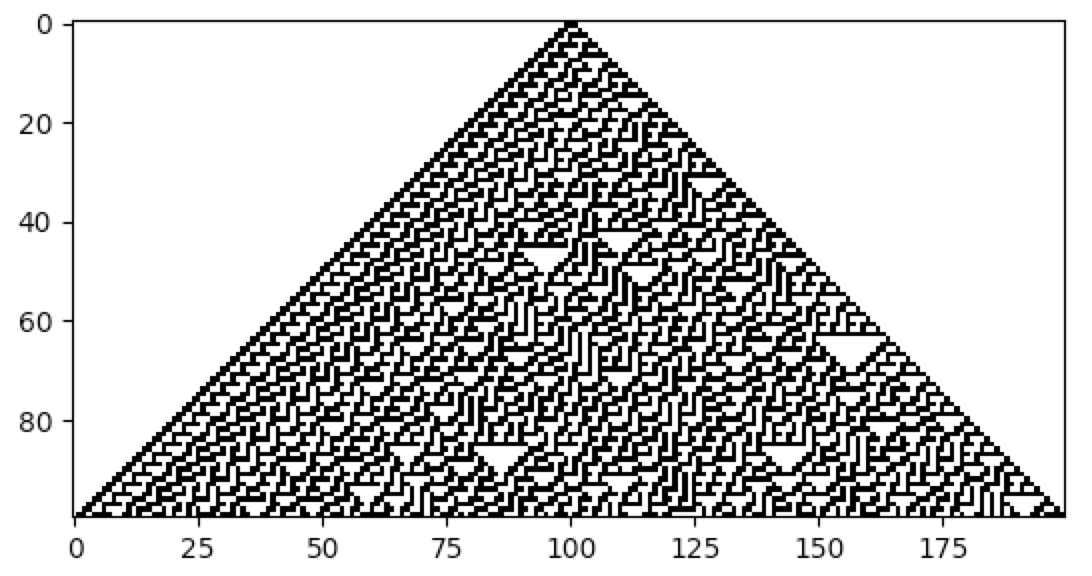 There are built-in functions for initializing CA randomly as well, in the init_random() and init_random2d() functions.

The timesteps parameter is simply an integer representing the number of timesteps the CA should undergo evolution, or application of the supplied rule. Note that the initial conditions of the CA are considered the 1st timestep, so, for example, if timesteps is set to 3, then the rule will be applied two times. This assumes that the number of timesteps is known in advance. However, in some cases, the number of timesteps may not be known in advance, and the CA is meant to be evolved until a certain condition is met. For such scenarios, the timesteps parameter may alternatively be a callable that accepts the states of the CA over the course of its evolution and the current timestep number, and is expected to return a boolean indicating whether evolution should continue. If the callable returns False, then evolution is halted.

There are a number of built-in functions to help visualize CA. The simplest is perhaps the plot() function, which plots the evolution of a 1D CA. There is also the plot_multiple() function, which will create plots for multiple CA in the same invocation. For 2D CA, there is the plot2d() function. This function accepts an additional argument, timestep, which represents the particular timestep to be plotted. If none is given, then the state at the last timestep will be plotted. Finally, the evolution of 2D CA can be animated, with the plot2d_animate() function.

Memoization is a means by which computer programs can be made to execute faster. It involves caching the result of a function for a given input. CellPyLib supports the memoization of rules supplied to the evolve() and evolve2d() functions. By default, memoization is not enabled, since only rules that do not depend on the cell index value, the timestep number, or that do not store any state as a result of invoking the rule, are supported for memoization. Only the cell neighbourhood is used to index the output of the rule. Memoization must be explicitly enabled by passing along the memoize parameter with a value of True when invoking the evolve() and evolve2d() functions.

Memoization is expected to provide an increase to execution speed when there is some overhead involved when invoking the rule. Again, only stateless rules that depend only on the cell neighbourhood are supported. Consider the following example of rule 30, where memoization is enabled in one case:

The program above prints:

(results may differ, depending on the device used)

To provide a further speed improvement, memoization can be combined with recursive structures, such as binary trees and quadtrees. This approach is heavily inspired by the well-known HashLife algorithm for fast cellular automata simulation, which also combines memoization with quadtrees.

Although CellPyLib does not provide an implementation of HashLife, it does provide an option to sub-divide a finite grid into halves or quadrants, and apply memoization at various levels of the resulting binary tree or quadtree. This results in a significant speed-up when there are repetitive and regular patterns in the CA. To combine memoization with tree structures in CellPyLib, provide the memoize option with a value of “recursive” when calling the evolve() and evolve2d() functions. The following code snippets provide an example:

And for the 2D case:

Note that, as is the case when using regular memoization (by providing the memoize option with True), only stateless rules that do not depend on the cell index or timestep number are supported when supplying the memoize option with a value of “recursive”. Also, only CA that exhibit regular and repetitive patterns will demonstrate a significant decrease in execution times. Finally, 1D CA that have \(2^k\) cells, or 2D CA that have \(2^k \times 2^k\) cells, should result in lower running times when “recursive” is used.

To illustrate the operation of this algorithm, consider the following diagram, in which a 1D Elementary CA (radius 1) is organized into a binary tree: 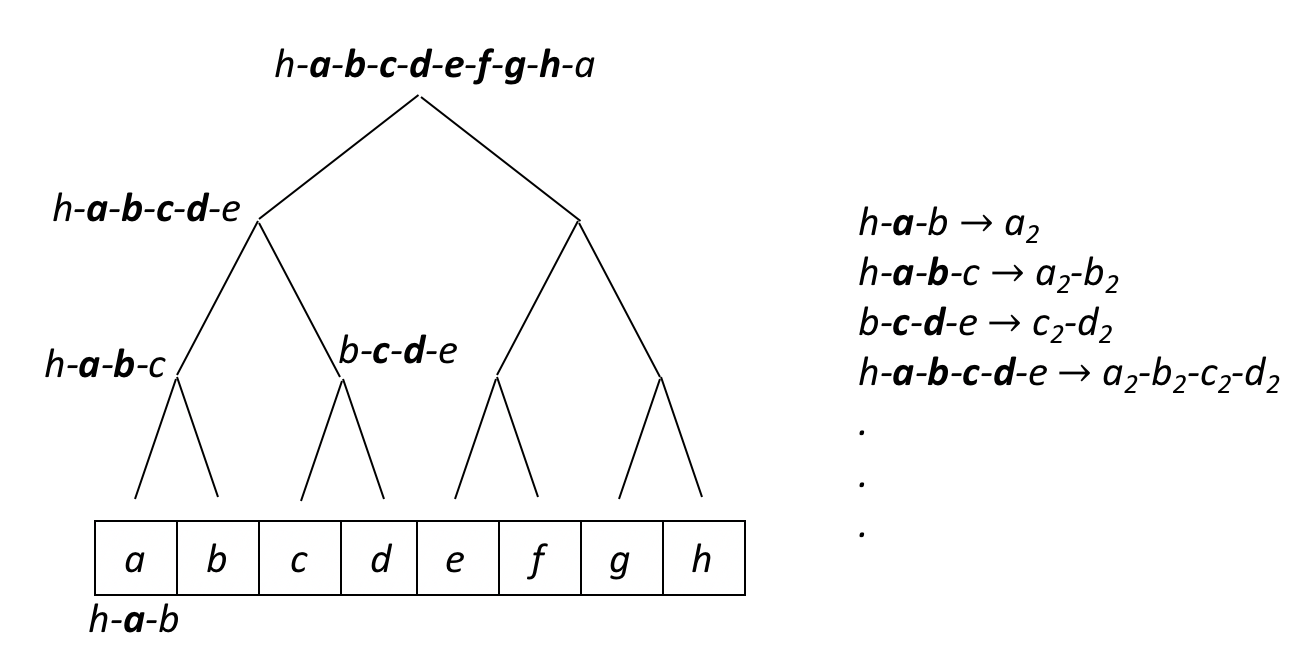 There are 8 cells, which are annotated with the letters a through h. Each node in the binary tree represents the neighbourhood of one or more contiguous cells. At the bottom of the tree, the leaves are simply the neighbourhoods of each cell. For example, one node represents h-a-b, the neighbourhood for cell a. At progressively higher levels of the tree, each node represents wider neighbourhoods encompassing more cells. The list on the right of the tree represents the memoization mapping from each neighbourhood to the subsequent values of the cells in question. In this example, the memoization cache would contain an entry indexed by a state of the neighbourhood h-a-b and its associated value for a in the next timestep, as given by the CA rule being used. The idea is to start, at each timestep, from the root of the tree, looking in the cache for existing states that correspond to the neighbourhoods in the tree, and updating the values of the cells represented by a node/neighbourhood if an entry exists in the cache. This should result in an increase in execution speed, since the children of a node needn’t be visited if a state was found in the cache. CA that exhibit regular and repetitive patterns will benefit the most from this approach. CA that exhibit much less regularity (e.g. ECA Rule 30), will not benefit from this approach, and may in fact incur a performance penalty. In such a case, it might be best to use a regular memoization scheme (by providing the memoize option with True). For 2D CA, the same concept applies, with the difference that the cells are divided at each level into quandrants rather than halves, forming a quadtree.